Bank Hall Locomotive Depot in 1948: two ex-Lancashire & Yorkshire engines outside the smaller through Shed: ex-L&Y 1F 0-6-0T No. 11535, fitted with dumb buffers and swinging spark-arrestor for working in the Docks; behind it is Class 30 6F 0-8-0 No. 12782. (Beyond can be glimpsed an 8F 2-8-0 with the unusual combination of 'M' as well as the BR initial '4' added to its number). Photo: 20 June 1848 by Ben Brooksbank, Creative Commons Attribution-ShareAlike 2.0 license.
Recording Locomotive Sightings 1943 - 1968
A generation of enthusiasts recorded the movements of locomotives around the railway system. These records of visits to locomotive depots have been collected and carefully analysed to provide an overall portrait for the period 1943 to 1968. During that period of steam's final years, there was a marked change from the pre-grouping types that still found work at a few depots, to the modern BR designs that worked until the end in 1968. The handling of freight and passenger services was a major undertaking from town and cities, ports, coal mines and factories. All of it traversed the labyrinth of lines that criss-crossed the country. There were numerous 'sheds' spread throughout the length and breadth of the land that provided and serviced the vast army of steam locomotives (20,000 in 1948). Here is just a taste of that history. 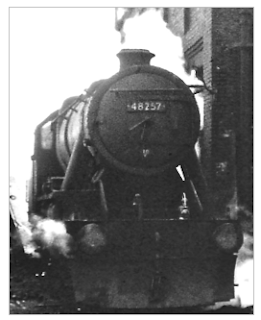 Please note that the LINKS are gradually being restored.

Abbreviations used in these lists